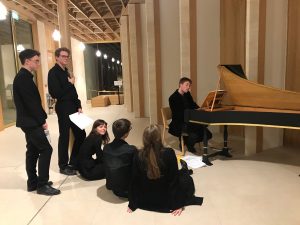 JULIA ALSOP reflects on a weekend of exciting concerts and services.

As first week comes rolling in during Hilary Term, the majority of chapel choirs prepare to get up and running again, working up to singing together again after a vac of indulgence and, in all likelihood, a break from frequent choral singing. However, the singers and musicians of Worcester College Chapel threw themselves straight into intense and ambitious music making with our new Epiphanytide Festival instead.

Kicking off the festival, we began with a glowing Epiphany Carol Service. Featuring a range of repertoire from Praetorius to Dove, the popular service was an ethereal and special occasion to open the festival.

Friday was a busy day. The afternoon featured a harpsichord masterclass in the chapel run by Professor Terence Charlston. With music from Purcell to Bach, the class featured five talented performers, all music students at Worcester College.

MSt student Tom Metcalf described the experience, explaining that, “It is always a pleasure to play in the harpsichord masterclasses at Worcester. Prof. Charlston’s fantastic insights on the music of Rameau and the courtly sarabande have encouraged me to engage with the style further and refine my technique. I’m already looking forward to the next one!” Four of the choristers from the boys’ choir were also invited to watch the class, and were allowed to try the harpsichord afterwards – an exciting first for all of them.

In the same evening, we were delighted to introduce a ‘Byrd & Beer’ event in the Sultan Nazrin Shah Building. Singing choir favourites such as Laudibus in Sanctis and O Lord, make thy servant Elizabeth, interspersed with beer tastings from local brewery, Tap Social, and flourish-filled harpsichord works played by Tom Allery, the event was a fun and innovative way to experience glorious music in a less formal setting.

The biggest event of the festival was, of course, the choir’s performance of Handel’s Messiah, a spectacular and beloved work. Inviting in professional strings and trumpets, as well as fantastic soloists, we produced an invigorating concert in an extraordinarily full chapel – who knew we could cram so many people in to enjoy the concert? 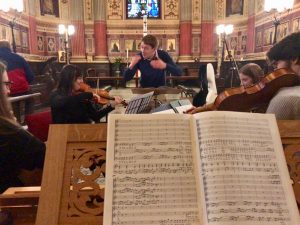 It is perhaps worth also mentioning the, admittedly slightly geeky, way the choir prepared for singing Messiah. Sure – we spent hours working out where we could discretely add ornaments to our lines (if you sing alto, you can get away with adding pretty much anything when you’re in the middle of the texture, but I didn’t tell you that…), and mastering the intricacies of the runs. However, it was when Tom Allery, the director of music, tasked the choir of writing short poems about their favourite choruses from the oratorio, that we could all share how affectionately excited we had become about the work. It would only be right to share some of the best:
‘The chorus that is my bae,

The one that I could listen to all day,

‘There once was piece called Messiah

that was sung by a fine college choir.

With semis a killin’, and Dafydd a trillin’,

That performance was really on fire!’

The final event, on Sunday, was a service of Latin Vespers, featuring a plethora of plainsong chant and Vivaldi’s Magnificat, for which we welcomed back the strings. The service was sung by both the mixed choir and the boys’ choir, and included beautiful solos from choral scholars. The boys were also delighted to learn more about the Baroque instruments used to accompany the choir (yes, those strings are made from real guts!)

All in all, with a delicious musical programme (Handel, Vivaldi, Byrd and beyond within just a few days – is there anything better?!), the Epiphanytide Festival has enabled the choir to launch straight into the term’s musical life on a high. There is plenty more to look forward to later in this term, and next year’s Epiphanytide Festival will be just exciting (watch this space). We hope you enjoyed the events you attended, and if you didn’t manage, make sure you do next year!