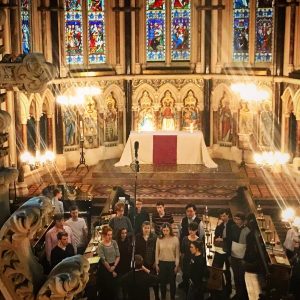 This week we are recording a CD of early 20th century English music in the beautiful 19th Century Exeter College chapel.

We are very lucky to be joined by a fantastic production and engineering team: the lovely Jon Olive and the charismatic Greg Hallam.

At the end of day we found ourselves ahead of schedule having recorded six pieces, including repertoire by Sir William Henry Harris, Sir Charles Villiers Stanford and Herbert Howells.

In addition to this project, the experience of having the choir together for the recording offers the chance for both organised and spontaneous fun. This began with frisbee (and subsequent frisbee fishing from the college lake) during our lunchtime choir picnic. Later we took advantage of the glorious weather (given that we had spent most of the day inside) and engaged in pre-dinner entertainment including an energetic game of sardines, with one of our bass choral scholars, Alex Scott, managing to avoid detection for a whole hour. 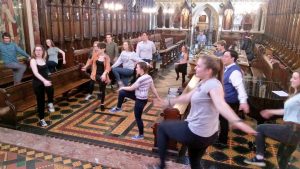 The evening concluded with an exuberant ping-pong tournament and a movie screening of Bridget Jones’ Diary. We trust that the social festivities will continue throughout the week as we also look forward to singing for a Gaudy in Worcester College later in ninth week.

As well as providing an opportunity to record high quality performances of interesting works (some previously unrecorded), this project has given choral and organ scholars chance to develop their ensemble skills working as a team, and enjoying the opportunity to singing in a new space.

As we are blogging, we are now having a well-earned drink in The Lamb and Flag after a hard day’s work of recording. Exeter College chapel is a particularly warm, all the more noticeable when you have spent the whole day recording in there, so the breaths of fresh air between takes and the free time outside are much appreciated. Once again we have had a successful day, with another five pieces in the can.

As part of today’s blog we ask a few questions to our engineer, Jon Olive. 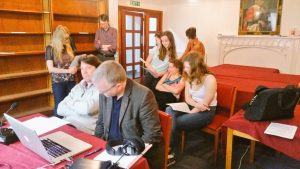 Tom Allery: It’s been great to welcome you to our college and choir community. Are you enjoying the project as much as we all are?

Jon Olive: Absolutely! Every once in a while a job comes up that turns out to be so rewarding that you would have done it for free. This is honestly one of the most enjoyable jobs I’ve done. I’ve really loved it so far.

TA: What does your role in the recording process involve?

JO: The role of the recording engineer is to capture the sound of the performance in such a way that when someone listens to the CD they get as close as possible to the experience of listening to the ensemble live. I add the finishing touches, including ‘mastering’ it; this is the process of doing subtle editing to ensure that the sound recording works as a CD.

TA: How did you get into sound engineering? 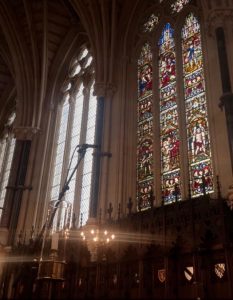 JO: I saw a program on TV about the BBC Radiophonic workshop, which used to be a department in the BBC that specialises in creating sound effects for television, including all the weird sound effects in Doctor Who. After watching this, I realised that this was an industry I wanted to be involved in. I went on to study at the University of Surrey on the Tonmeister course, which offered me a way of developing skills in sound design so that I could pursue it professionally.

TA: Obviously this week you have been working with us on our latest CD, is this your main interest as a sound engineer? What else have you worked on?

JO: Making records is actually a small part of what I do. I’ve done a lot of work in feature film sound design, including working on ‘The Mummy’. One of the sound design moments I’m most proud of in ‘The Mummy’ is at the end of the film when all the soldier mummies march out; I designed the sound for these soldier mummies. I also worked on all the Harry Potter movies, which involved working with the famous composer, John Williams. Another movie I was also a sound editor for the movie ‘Love Actually’.

Aside from feature films, I have also worked on a variety of projects, with a particular highlight being working on the recording team for Vienna’s New Year’s Day Millennium Concert.

TA: What has been you favourite piece in this project?

JO: My favourite piece would be John Ireland’s ‘Ex Ore Innocentium’. I honestly had a tear in my eye whilst listening to the recording takes. It was absolutely stunning.

Thanks to Jon for letting us interview him. Tomorrow we are looking forward to recording our final pieces for the CD, particularly nailing Howells in G!